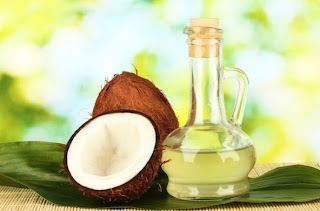 This week's Pantry Basics post will focus on Coconut Oil. I have just started using coconut oil recently and really didn't know much about it other than that I really liked the taste of it. So, I decided to do a little research and see what I could find out about it to share with you. We'll look at general information about coconut oil such as how it is processed, types of coconut oil available, health facts about coconut oil, and recipes to put it to good use. That's a lot to cover in one post, so we better dive in!
How Coconut Oil Is Produced
I did a little online reading and the general consensus among a number of different websites is that there are two main methods for producing coconut oil. The first method is the wet process and the second is, you guessed it, the dry process. Here is a brief description of each method:
That above is the most basic method of processing coconut oil for human consumption. Lets talk about the main two types of coconut oil produced using the above methods that are available for purchase.
Types of Coconut Oil
There are two main types of coconut oil on the market - Extra Virgin Coconut Oil (can be cold pressed or not) and Refined, Bleached, Deodorized Coconut Oil (RBD).
Extra virgin coconut oil is made using the wet process of production as this typically produces the highest quality coconut oil. This oil has a fresh, mild coconut flavour. Cold pressed is the highest quality since it doesn't have any heat or chemicals applied during production which means minimal flavour change or loss of nutrients. Either way, you will notice that extra-virgin coconut oil is the most expensive because using the wet process yields far less oil than the dry process and as a result more coconut goes into the making of extra virgin coconut oil.
The second type of coconut oil is RBD. This oil is highly processed to the point where the coconut smell and flavour are removed from the oil. This oil is often used for cooking where the coconut flavour is not desired. This oil is also often used for cosmetic and other industrial applications.
Moral of the story: Based on the above information, in most cases extra virgin coconut oil is best - it has superior flavour, is processed less and if you buy cold pressed it doesn't have chemicals applied during processing. Especially from a health perspective, I would go with the extra-virgin oil.
﻿ 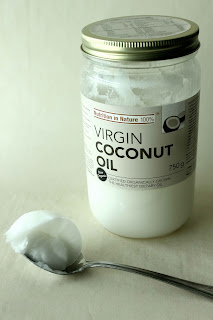 Cooking with Coconut Oil
When you're cooking or baking with coconut oil, the substitution ratio with butter and other oils is one-to-one. That means if a recipe calls for one tablespoon of olive oil, you can use one tablespoon of coconut oil. Coconut oil can make a great substitute for olive oil, butter, shortening and canola or vegetable oil.
Coconut oil has a high smoke point - 350F for regular coconut oil and 320F for virgin coconut oil. This makes it great for most cooking and baking related applications! Remember that oil shouldn't be used at temperatures past its smoke point.
Health Facts about Coconut Oil
There are a lot of claims out there about the miraculous coconut oil. I don't really buy into most of them because there doesn't seem to be a lot of scientific research to support those claims, but what I do know is that there are some great things about coconut oil and some not so great things. Here's what I know:
After doing some reading online, there has been a small amount of research done on coconut oil's health benefits, but there has not been much in the way of conclusive results. According to the Mayo Clinic website:

"Although eating coconut oil in moderation for a short-term diet probably won't harm your health, it may not help you lose weight. And keep in mind that coconut oil actually has more saturated fat than do butter and lard. For successful, long-term weight loss, stick to the basics — an overall healthy-eating plan and exercise."

That seems to be the general consensus among researchers and medical doctors that are science based. Any other benefits that may be experienced may be legitimate, but the benefits so far haven't been able to be reproduced over the general population.
Recipes using Coconut Oil
Despite the inconclusive results regarding the wild health claims made about coconut oil, its no worse for you than any other type of oil when used in moderate quantities, and it has great flavour, so you may as well try it out! Here are some recipes and ideas for incorporating it into your kitchen routine:
Hope this gives you a good start! Do you already cook or bake with coconut oil? If so, what is your favorite thing to make with coconut oil? Please feel free to share in the comments. :) 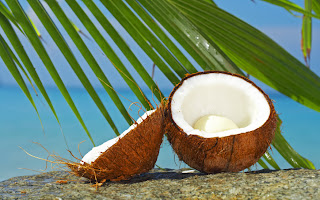 Happy Cooking my Friends!
Posted by Unknown at 7:00 AM