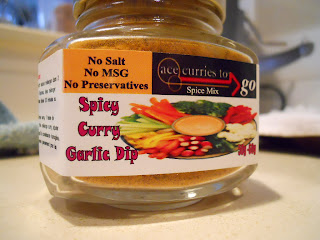 Whew!! Seems like every month I'm surprised when this deadline creeps up on me, but it is time for the Secret Recipe Club reveal again. You can imagine my dismay when this afternoon I got the reminder that my post had to be up tomorrow morning... whoops! Hadn't even made my dish yet. This is not to say I haven't been considering what to make because I've been browsing through Rivki's blog Healthy Eating for Ordinary People periodically since it was assigned to me. I really, really wanted to make griddle bread... but totally ran out of time today. So I quickly browsed Rivki's blog this afternoon and found this yummy recipe for Roasted Chickpeas. 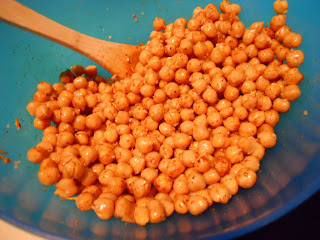 I was pretty stoked to find such a delicious recipe for chickpeas on Rivki's blog! I was a little nervous about being assigned her blog at first because it looked sooooo healthy! I am not a huge fan of all veggies and there are a LOT of veggies on her blog. I was pleasantly surprised to find "normal" food on her blog! And plenty of delicious looking recipes like this Raspberry Peach Tart, Roasted Peaches, and these Lemon Mint Zucchini Pancakes to name a few!  You should definitely stop by and check it out next time you're looking for a healthy way to incorporate some fresh veggies into your diet. 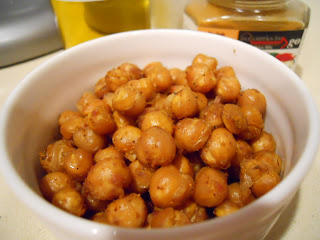 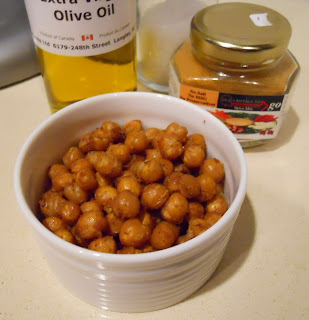 So easy right?! And unbelievably delicious. Thanks Rivki for such a delicious and simple recipe.

Okay, I'm aware that summer is officially over... the rain and dreary skies have set in here in Vancouver and the days are starting to get shorter. But I must share this delicious, icey drink with you today!! This is the perfect Friday night drink to celebrate the start of the weekend. Despite being a slushy drink, it isn't sweet - it has a grand total of 2 tablespoons of sugar! So for those of you who don't like sweet, this is the drink for you! And for those of you who do like sweet, sweeten this drink to taste!

I have to apologize though... no pictures of this one. I took a photo of the mixture in the blender before I blended it, but then I got wayyyy too excited to drink this one and suddenly it was gone and I had no photos... oh well, just gives me an excuse to make it again. Wooohooo!!

Ingredients:
Method:
Hope you enjoy this delicious drink!! I can't wait to make it again. :) Thanks for hanging in there despite the fact that my blogging has dropped off to only once or twice per week... hoping that by the beginning of October things will have settled down a little around here! Until then... once a week it is. 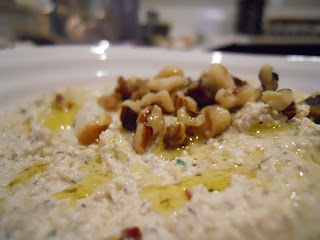 I've been complaining all summer about how bad the weather has been... now, in the first week of September we get 30 degree weather alllll week! Its beautiful, but it feels super hot compared to what we've had. Our townhouse heats up super fast when I turn on the oven, so this is a great option when you don't want to heat yourself out of your house on a hot summer day (assuming you've got roasted garlic on hand already)! 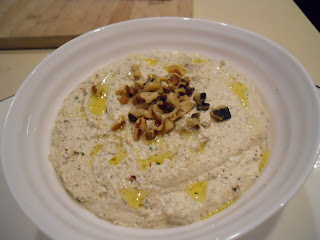 I probably wouldn't have tried this recipe if Hubby hadn't asked me to! I'm not a huge fan of feta and this dip sounded so weird, but he picked it out, so I made it for him and ended up loving it! 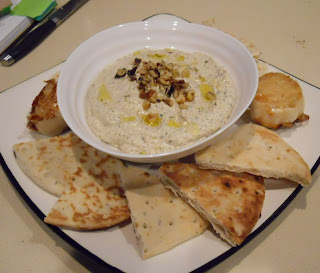 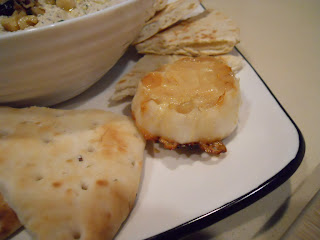 Ohhhhh so good!! I can't wait to make this again. I think Huby and I each ate one whole head of roasted garlic... next time I would make more roasted garlic. :) Such sweet, carmelized goodness. Definitely a weird sounding dip, but the flavours really work to create a delicious, unique starter. 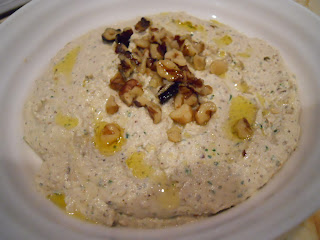 Happy Cooking my Friends!
Posted by Unknown at 5:58 PM 1 comments 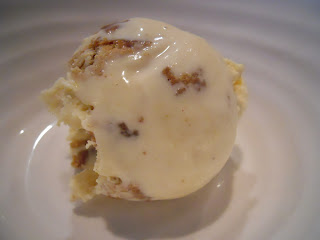 I have a few minutes to spare this morning before I walk my dog, so I thought I would share this delicious recipe with you! We are getting some amazing September weather here in Vancouver, better than we've had most of the summer. So what do you make when the weather is great? Well, ice cream of course! I found this recipe on one of my favorite blogs - Tracey's Culinary Adventures. I'm always amazed at the delicious things Tracey makes, but this ice cream sounded unbelievably good! I finished my ice cream with salted caramel sauce, but honestly, its not necessary - this ice cream is an amazing stand alone flavour. 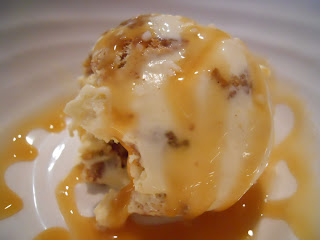 Whew!! Sounds like a lot of work and a lot of steps, but its pretty delicious ice cream, so I would definitely make it again. :) Hope you have a fantastic weekend and that the weather is nice where you live too.

Happy Baking my Friends!
Posted by Unknown at 9:43 AM 1 comments

﻿ ﻿
I'm so excited to share this pie with you! It tastes so amazing and just screams summer what with the beautiful fresh blackberries and the tart burst of lime that offsets the blackberries so nicely. This is like a traditional lemon meringue pie gone rogue! If you love summer desserts, you must try this one before the summer's beautiful bounty has disappeared from the market.﻿

This pie is a bit involved, but you can cut down on the effort by purchasing the pie crust if you want. I am a bit of a baking snob, so I wouldn't buy the crust, but don't worry, I won't judge if you decide to. :) There are four parts to this pie: the pastry crust, the lime curd, the blackberry compote and the italian meringue topping. In addition to being quite involved, you don't want to make this pie too long before you serve it - it is best served within three hours of making! But don't let that stop you - this pie is well worth the effort. It looks so impressive and artistic once it is put together and it tastes amazing!

﻿ ﻿
So lets get started with the recipe. For the pastry I'm going to direct you to Anna Olson's pie crust recipe which I posted in my Cherry Pie blog post. This is my absolute favorite pie crust recipe and it is super easy to whip up in the food processor. Once you've whipped up your pastry - chill for one hour in the fridge, then roll out and fit into your pie dish and then chill for another half an hour. Next blind bake the crust. Here are the blind baking instructions:
The next component to make is the lime curd. This curd is so delicious you're just going to want to eat it by itself, but do try to save some because it does go really nicely with the blackberry compote!!

﻿ ﻿
Next up, make the blackberry compote. When I make this recipe again, I will likely reduce the amount of liquid in the compote - I found it to be quite runny in the bottom of the pie. The other option is to reduce the compote quite a lot until very syrupy  prior to folding in the blackberries. Either way, the taste is great, it just didn't set up as nicely as I had hoped.

Are you tired yet? You're in the home stretch - you just need to make the meringue and assemble the pie now. You can do it!! Its worth it. :) 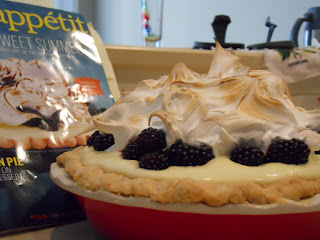 Whew! What a lot of work! I brought it to a summer bbq and it was very well received. I hope you enjoy it too. Do you have some exciting plans for the last weekend of summer? Hubby & I are heading kayaking tomorrow and keeping our fingers crossed for another beautiful day of sunshine. 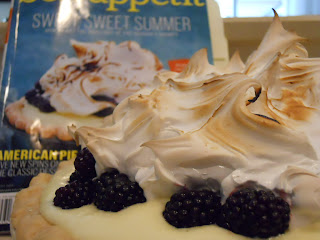 Happy Baking my Friends!
Posted by Unknown at 11:48 AM 2 comments 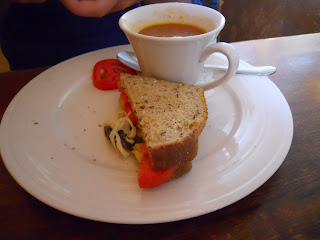 My sister & I did a day trip to Fort Langley, BC the other day - we browsed through some of the cool little boutique stores, checked out the farmers market, and went for lunch at the Lamplighter Gallery Cafe. The Lamplighter Gallery Cafe is a quaint little lunch place that makes some delicious sandwiches, soups and other dishes. All of the food was really reasonably priced too!! If you're out in Fort Langley any time soon, do give this place a try. 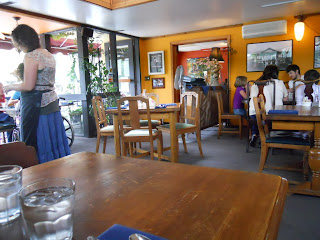 I ordered the Fort Langley sandwich with smoked salmon and halibut chowder for lunch. The Fort Langley sandwich is made with free range organic chicken salad and roasted garlic cranberry mayo. The sandwich was absolutely delightful with the roasted garlic-cranberry mayo adding such depth of flavour to an otherwise classic chicken salad sandwich. The chowder was slightly under-seasoned, but the other flavours were there, so once I seasoned it with salt, it was great! 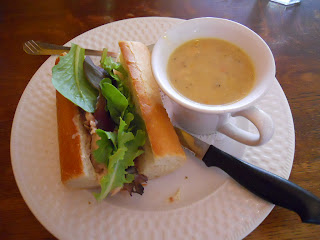 I would give this restaurant a 4/5 overall. If you do get a chance to try it out, let me know how you like it!